Golden Bear is excited to announce the release of their new album, Dear Texas. As the title implies, the album is a love letter to the band’s home state. All of the songs were written and recorded during the quarantine, with band members contributing their parts from their homes.
Dear Texas takes listeners on a journey across Texas from the west Texas plains through the hill country, all the way to the Gulf of Mexico. The album’s songs convey a yearning to get on the road, remember past adventures, and to create new ones. 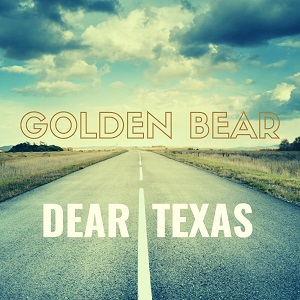 “You’re in for a full-fledged power-pop epic…something special.” – MTV Hive

“Tunes evince a sense of singalong pop songcraft that bespeaks a mature band coming into its own, rather than aping its influences.” – The Big Takeover

“Its five songs are melodic and catchy bits of indie pop that lodge in the listener’s head.” – SpectrumCulture.com

“The Austin quintet’s EP, Everest, is five songs of an unabashed joyful noise that chips away the darkness with lyrics and cuts it away with music.” – StereoSubversion.com

Golden Bear – To the Farthest Star

” The Austin quintet doesn’t force elation; it comes with the territory.” – The Austin Chronicle

“Golden Bear constructs perfect songs, each with a blend of spontaneity and purpose. There is no excess. Each guitar lick, drumroll, and horn fill seems to be perfectly placed without effort.” – HearYa.com

“Songs this strong generate a motion and power of their own…a seemingly endless wellspring of hooks and asides.” – Austin American Statesman

Gulf of Mexico (from ‘Dear Texas’)